Fortunately I live by the Sea in North Devon, the beach has been my place to get fresh air and exercise during Covid-19 lockdown, especially as I have been able to take advantage of the sea with regular cold water swimming.  Inspired by the creation of land art, along with my photographer daughter Shena Ruth, we created a mandala with shells. The idea behind this is to research the potential of the landscape to create an inner experience. So what type of inner experience could be gained from creating in the landscape. Usually when I am on the beach I am walking or swimming, I struggle to sit especially in hot weather. I find calmness when painting or drawing in the studio, So I wanted to research whether creating in the landscape gave me the same calmness.

I chose to create a mandala  as they are often used in art therapy. The meaning of the word mandala in Sanskrit is circle.  The circular design of the mandala symbolises the idea that life is never ending and everything is connected, we decided to add the 8 offshoots to link with the 8 limbs of yoga. These include breathwork, concentration and meditation however ironically it also includes  pratyahara which is the withdrawal of the senses. Albeit this process might in the longer run heighten our senses?

Land art is art that is made directly in the landscape. Land art is varied and involves sculpting the land itself into earthworks such as the work Spiral Jetty created by Robert Smithson in the 1970’s. or making structures in the landscape using natural materials such as rocks or twigs as with artists such as Andy Goldsworthy and James Brunt. One area that I could delve into a little deeper is to investigate what inner experiences these named artists experience when creating art in the landscape.

When creating the mandala and and upon completion, I felt a strong link to psychogeography which is described by the Tate as the effect of a geographical location on the emotions and behaviour of individuals. The emotion of creating this piece of art by being in the landscape was very much one of calmness. Not only the act of seeking shells but also just sitting on a remote part of the beach and just awakening the senses to the smell of the sea, the smell and sound of the sea birds and the feeling of the sand on the body.

On showing the photographs from the mandala in a 1:1 tutorial with Richard Webb it was suggested that i should not include a photo of myself in the work but to create a triptych of the best 3 photographs. Also with the tutorial he suggested embossing. So back in the Studio I used both digital media editing the photographs in photoshop and placing them in Indesign but also wanted to incorporate some traditional printmaking. So using my x-cut machine I embossed the word calm to link the work in a tryptic with a colour palette to match. My next step was to put these in Indesign to create the image and now I am waiting for PCA to print my work in their Imprint lab.An alternative way to take this work forward would be to consider the work as Environmental art and addresses the social and political issues relating to the impact of pollution on the beaches or the effect climate might have on the dunescape. In a tutorial with Antigoni she directed me to the work In the Green line by Francis Alÿs I found the following quote intriguing ‘Sometimes doing something poetic can become political and sometimes doing something political can become poetic.’ I can find kinship with this statement as working with shells as although it was meant as a contemplative activity for myself, i could develop this into an environmentally piece by including other images which might involve plastics washed up on the shore line.

I also wish to investigate maybe a completely embossed book such as that created by Irma Boom when creating NO. 5 CULTURE CHANEL, 2013. Embossing is more tactile than print on a page, so it adds that extra sense of feeling to a print. However once processed digitally the tactileness of the embossing is lost. I need to investigate further how a print can root to the senses. 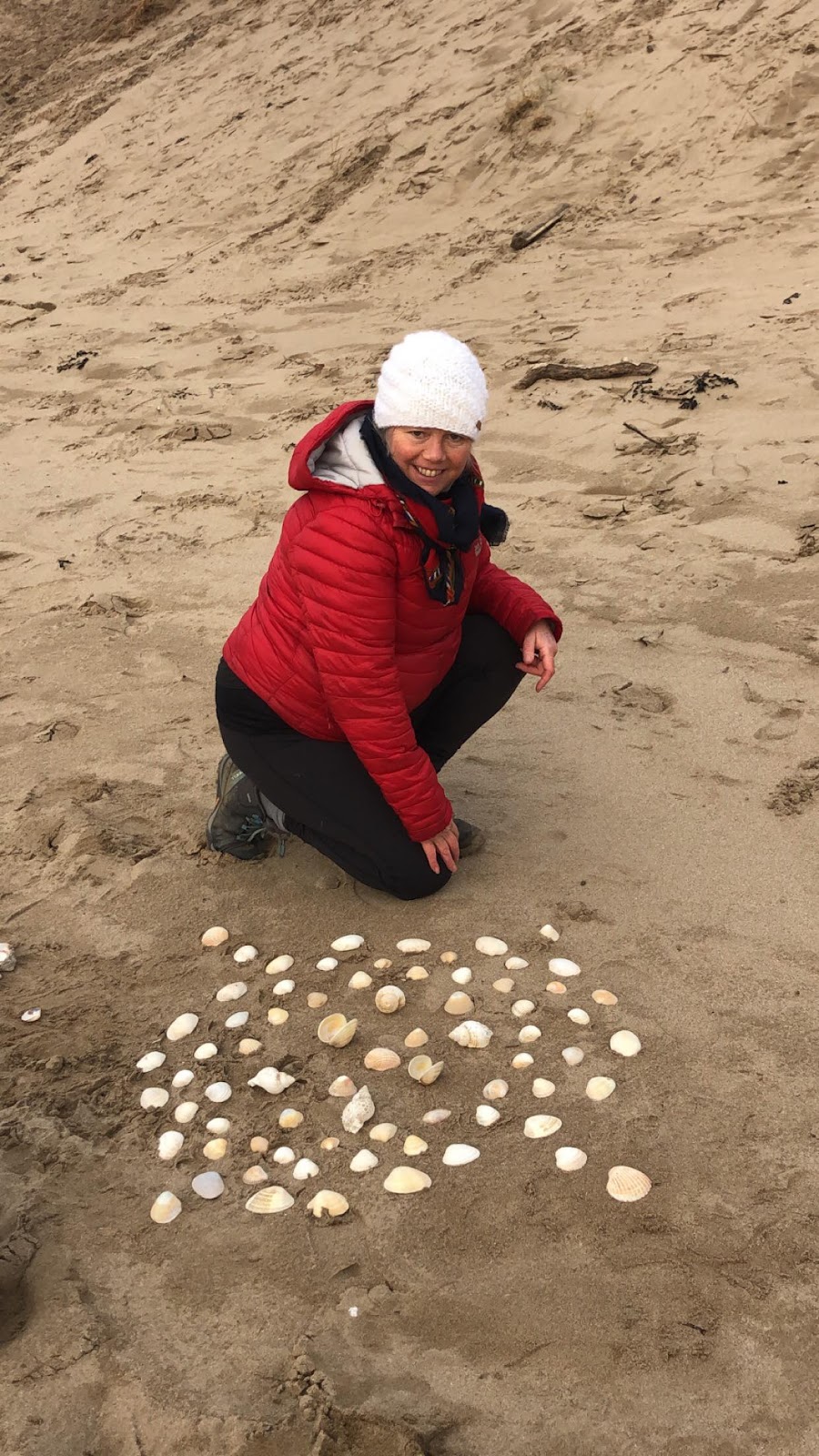 Selecting shells for the Mandala

The Mandala prior to the 8 limbs being added

The Mandala with the 8 limbs added 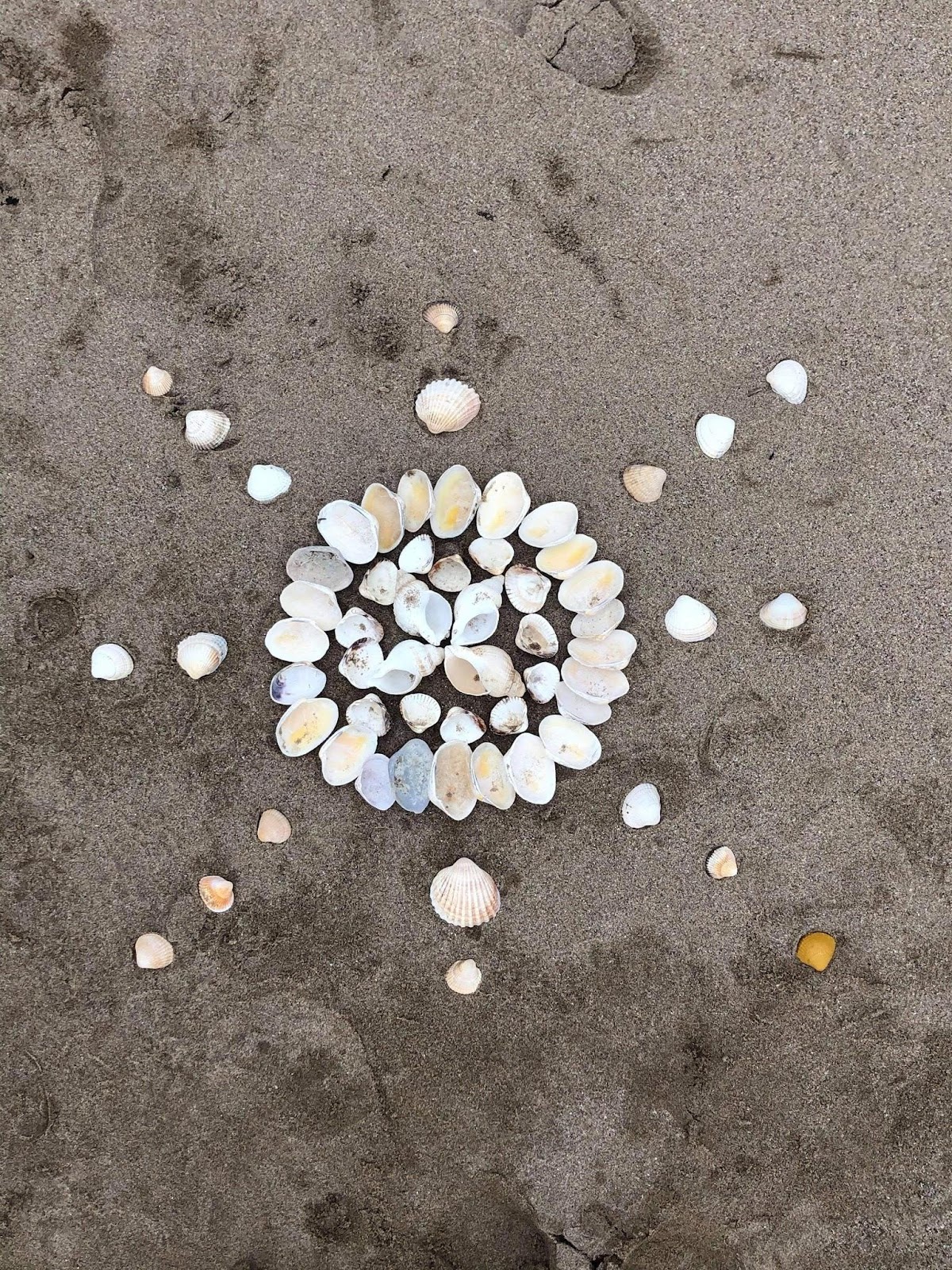